Recent 2019 trials of SUL4R-PLUS® B+Z product on wheat in Western Kentucky demonstrate the agronomic value of this innovative fertilizer products.

Three side-by-side wheat trials of SUL4R-PLUS® B+Z fertilizer, applied at a rate of 100 lbs. per acre, yielded 15 more bushels per acre than the grower standard. At today’s pricing, this is an increase of $67.50 per acre to the grower’s top line; talk about a ROI! And SUL4R-PLUS B+Z fertilizer can be applied in the fall or the spring.

See the complete summary above of the results of this trial with all four SUL4R-PLUS® products and contact us at www.SUL4R-PLUS.com to see how the agronomic advantages and superior quality of SUL4R-PLUS® crop nutrient products can help improve your grower’s top line.

To maximize yield and reach your crop’s genetic potential, it is always time to assess things that work and things that may need to be improved. When determining your calcium and sulfur needs, there are a few areas where you will want to pay close attention when selecting a pelletized or granulated gypsum product.

What role does pellet size, uniformity and density play?

Pelletized gypsums vary greatly in granular uniformity. There are two ways to measure pellet size, the size granulation number (SGN) and uniformity index (UI). SUL4R-PLUS® products have an SGN of 265 or 2.65 mm that is designed to match other blended fertilizers to make the most homogeneous batch. Most products on the market today ship their product at a UI of 30, From 5 mm to 1.5 mm. SUL4R-PLUS® products have a UI of >50 that means that the large to small ratio is 4 mm to 2 mm or 50%. The larger the UI the more consistent the pellet size and the increased accuracy of blending and delivery, resulting in even feeding and improved ROI. This UI is so tight that it is one of a few products on the market that can be used effectively in air seeders. Further SUL4R-PLUS® products are designed to have a density of 60 pounds per cubic foot that also aids in maximizing blending and spread.

What roles does particle size play?

Pelletized calcium sulfate dihydrate “Pell Gyp” ingredients vary greatly in raw material particle size, tremendously impacting speed and completeness of reactivity. Particle size dictates how fast that nutrient goes into solution. Finer ground products will go into the soil solution faster than coarsely ground products, which may never fully solubilize but micronized products are the fastest of all. Coarse mined products target the 4 to 10 mesh size so that they can be spread on the field, and some pelletized mined product are ground to (85%) minus 100 mesh (150 microns) but SUL4R-PLUS® fertilizer is 95% less than 325 mesh (44 micron) or +60% increased surface area over 100 mesh materials. The increased surface area allows the SUL4R-PLUS® products to more quickly dissolve into the soil solution making the nutrition virtually immediately available to the crops and the Ca to SO4 bond causes the nutrition to be continually released throughout the growing season and longer.

How do SUL4R-PLUS® products compare?

SUL4R-PLUS® products are produced by a patented process that delivers the highest quality product on the market. Pellet uniformity and particle size matter when it comes to getting the most effective product for your plant’s health. SUL4R-PLUS® fertilizer is manufactured from one of the purest sources of gypsum in the world, making it dissolve and solubilize quickly to improve plant health and soil quality.

Boron’s relationship with calcium is crucial for cell wall structure. Boron’s role is involved translocation of calcium into the plant. Adequate calcium nutrition is as crucial in plants as in animals, calcium in animals promotes bone development similar to calcium in plants promoting cell wall development.

For peanuts, boron is essential for adequate movement of calcium in the plant. A lack of boron which restricts calcium movement in peanuts causes “hollow heart.”

Regardless of the crop, cutting back on inputs like calcium and boron is cutting the crop yield potential.  The relationship between calcium is very crucial.

SUL4R-PLUS®, LLC has revolutionized the application of calcium, sulfur and boron. SUL4R-PLUS® BORON fertilizer micronutrient package delivers a potent trio of nutrients – boron, calcium and sulfur – while making nutrition immediately available to hungry crops. With 18% Calcium, 15% Sulfur and 1.5% Boron, it is an optimized micronutrient package – with fast-working nutritional power to deliver immediate and complete nutrition to all crops during the current growing season for macro yields and improved crop quality. And it is soluble as well:

And for more detailed information, read this article from Southeast FarmPress.

SUL4R-PLUS fertilizer maintains adequate nutrient value for over 60 days, while AMS loses all value between day 5 and day 10. 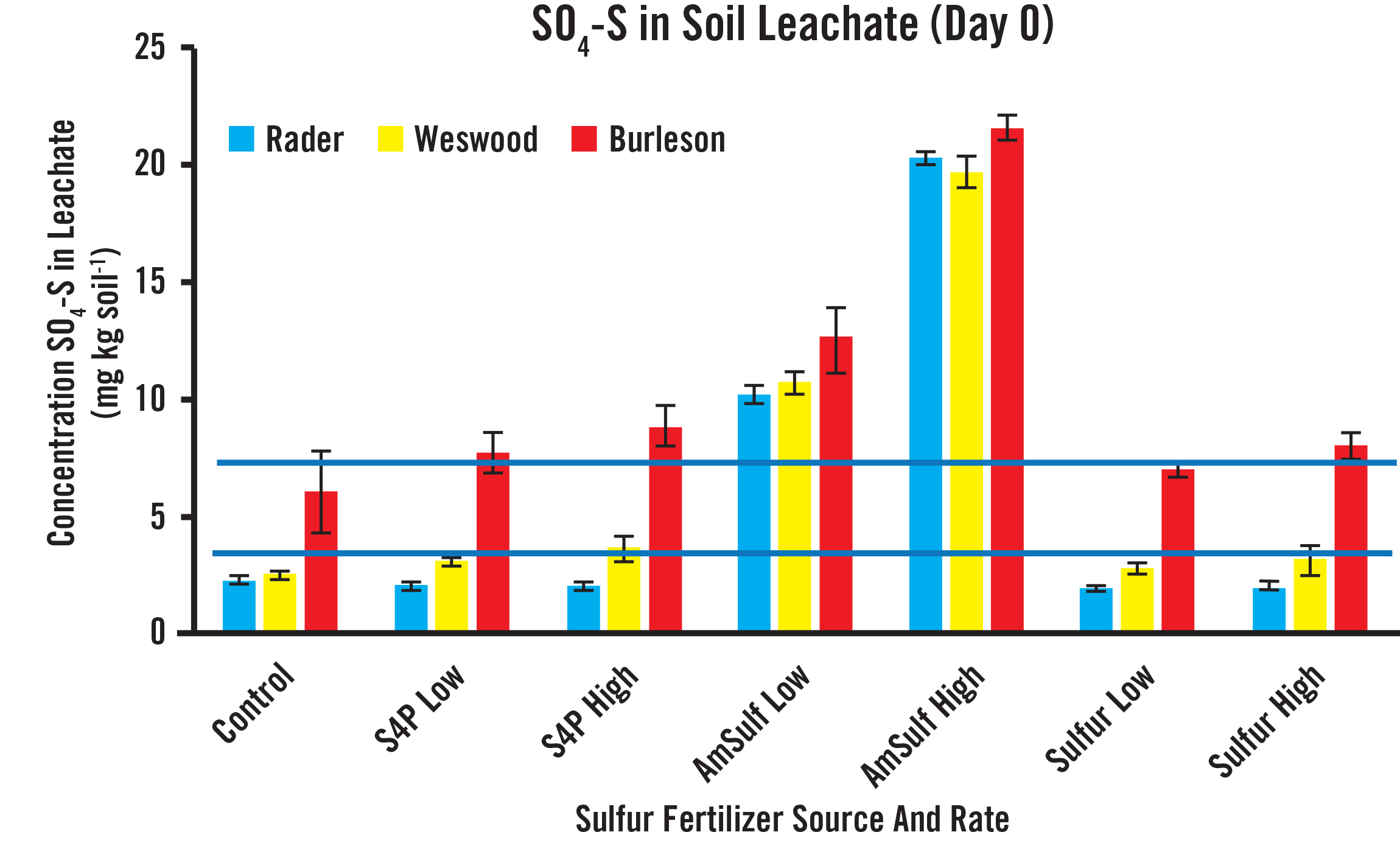 Day #1 of the Texas A&M Sulfur Product Leaching Study demonstrated the leachability of AMS over SUL4R-PLUS fertilizer (everything over the blue lines is lost nutrient value). 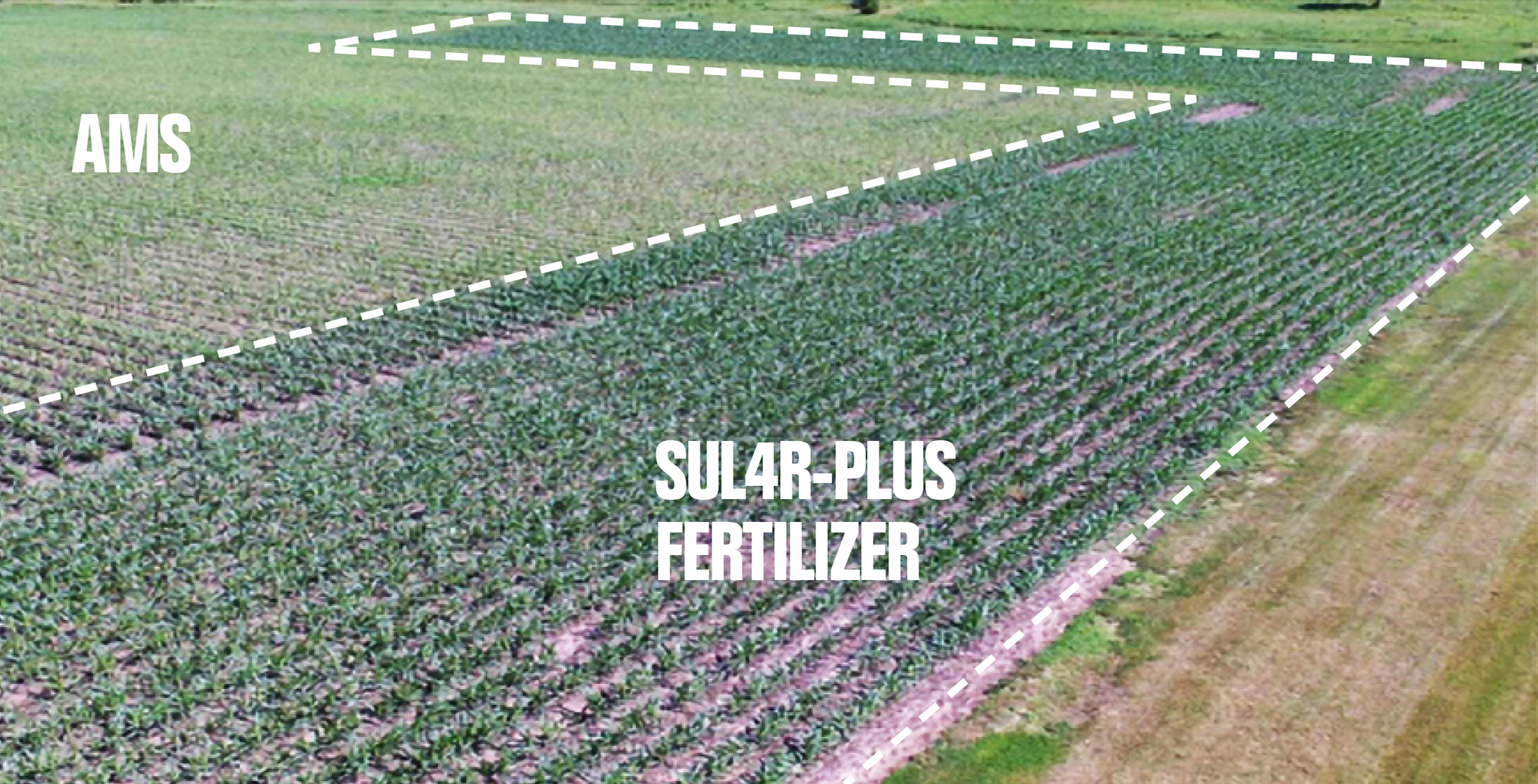 In a trial, the darker and taller corn had SUL4R-PLUS fertilizer applied, where the lighter and shorter corn had AMS applied. See that the AMS has leached out!

Let SUL4R-PLUS® products add bushels to your yields. Contact us at www.SUL4R-PLUS.com to see how the agronomic advantages and superior quality of SUL4R-PLUS® crop nutrient products can help improve your grower’s bottom line.

Let SUL4R-PLUS® products add bushels to your yields.
Contact us at www.SUL4R-PLUS.com to see how the agronomic advantages and superior quality of SUL4R-PLUS® crop nutrient products can help improve your grower’s bottom line.
Follow us on twitter @sul4rplus and LinkedIn for up to date field trial results.

An inadequate S supply will not only reduce yield and crop quality, but it will decrease N use efﬁciency and enhance the risk of N loss to the environment. Studies have demonstrated that supplying S to deﬁcient pastures increased yields, N use efﬁciency, and lowered N losses from the soil. Due to the close linkage between S and N, Schnug and Haneklaus (2005) estimated that one unit of S deﬁcit to meet plant demand can result in 15 units of N that are potentially lost to the environment. They calculated that S deﬁciencies in Germany may be contributing to an annual loss of 300 million kg of N (or 10% of the total N fertilizer consumption of the country).

Click here to read their article, Sulfur for Plant Nutrition.

I remember when I first started out at a retail farm center in the mid-seventies that agriculture was changing rapidly. Soybeans were a new row crop that we knew little about except that we planted them in 38” or 40” rows, put a couple of hundred pounds of a low nitrogen blend of fertilizer in the row, and cultivated them because we didn’t have good herbicides.

At that time, I was working in a large forage area with a lot of beef and dairy animals. The majority of corn that was grown never saw an elevator but was fed to the cattle and hogs either as a ground feed mix from the local mills or as silage in the dairies. 100 bushel to the acre was the magic number for corn yield, and 40 bushel to the acre was the number that we were reaching for wheat and soybeans.

I recently looked back at some soil tests that I still have from the seventies that came from our old Agrico soil laboratory in Washington Court House, Ohio. The seventy or so soil tests I have from that time showed no deficiencies of sulfur. As a matter of fact, all were sufficient or high. The universities did not even test for sulfur and for good reason………we were getting plenty from our power plants before the scrubbers were installed to clean up sulfur emissions, and from our cars, trucks, and tractors before we had catalytic converters and low sulfur fuels. Then we started to hear about acid rain which was killing our forests and polluting our atmosphere.

Fast forward 40 years and we are not getting free sulfur any longer. During my last five years at a retail farm center, 97% of soil tests have come back low or deficient in sulfur. This rate probably would have been even higher but some of my soil tests included burley tobacco in which the majority was required to use sulfate of potash. Our rates of applied nitrogen are doubled now compared to the seventies, and when you use a 16-20 to 1 ratio of N to S, that means the removal of sulfur is a lot greater than in the seventies.

So where do we get sulfur if it is not being supplied to us as it was then? Is sulfur (which is removed as pounds per acre), crucial to the production of today’s crop?

SUL4R-PLUS® products are a good and efficient way to provide the sulfur that is needed in agriculture today. SUL4R-PLUS products are in the sulfate form that the plant requires, and because the calcium nutrient is also contained in the granule, it is slowly released when the plant needs it.

Is all sulfur the same? I will be quick to tell you that elemental sulfur will probably not get released to the plant in the same year it was applied. Other sulfates, such as AMS, are so apt to leach that they could be gone in as short as 5-10 days (Texas A&M study – Dr. Mowrey).

Harry S. Truman once said, “The only thing new in this world is the history we haven’t read.” History shows us that we once got all the sulfur we needed. Now we know our sources of sulfur are no longer available and we have to supply it! We must recognize the need for a good source of sulfur for our crops if we are to be efficient and productive. SUL4R-PLUS products are what I, the Crop Doctor, prescribe.

A recent trial of SUL4R-PLUS® products on cotton in Tifton County Georgia demonstrates the agronomic value of these innovative fertilizer products.
In Tifton – Loamy Sand soil, SUL4R-PLUS® B+Z fertilizer, applied at a rate of 100 lbs per acre, yielded .44 more bales per acre, or 220 lbs of lint per acre than the grower standard.  At today’s pricing, this is an increase of $173.80 per acre to the grower’s top line.

In the same soil conditions, SUL4R-PLUS BORON fertilizer, applied at a rate of 100 lbs per acre, yielded .56 more bales per acre, or 280 more points of lint per acre than the grower standard.  At today’s pricing, this is a top line increase of $221.20 per acre for the grower.

See the complete summary above of the results from this trial with all four SUL4R-PLUS products and contact us at www.SUL4R-PLUS.com to see how the agronomic advantages and superior quality of SUL4R-PLUS® crop nutrient products can help improve your grower’s bottom line.